Fire Damage Restoration: How Do You Decide What to Throw Away After a Fire in Columbus AL? 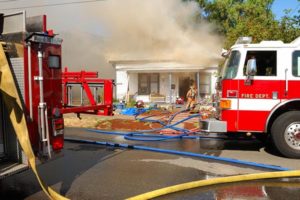 After seeing the deviation from a fire in your home, it is difficult to determine what is still safe and usable. The task of sorting through the burned and charred items is overwhelming. As a rule of thumb, you probably need to trash anything that has been directly  affected by soot, smoke discoloration or fire extinguisher dust.

But you may also need to discard stuff that looks ok. For example, dangerous chemicals can be either ingested or be absorbed through your skin from contaminated sources. From our fire damage restoration experts at Restoration 1 of East Alabama, here are some general tips:

The microscopic particles in the air during a fire can permeate deeply into your expensive electronic devices. The chemical reactions on copper, silver and other metals can cause electrical shorts.

Metal surfaces and screens can be permanently etched, stained and discolored if soot and smoke are allowed to remain after a fire. To be safe, do not use your TV, small appliances or kitchen devices until they’ve been checked for water, heat, and soot damage.

When man made materials are burned they release toxic volatile organic compounds (VOC’s). Smoke and soot contain dangerous chemicals as do the products used by firefighters. These can be hazardous if  ingested, inhaled or absorbed by the skin. And simply running clothes through the washing machine won’t remove all the dangers.

Other household fabrics like bedding and carpet also absorb the smells and chemicals of smoke, soot and firefighting chemicals. The process and mess of fighting the fire plus the foot  traffic from the workers probably contaminated the carpets. It is often best to just get rid of these large items. The fire damage restoration experts at Restoration 1 are your best resource for determining if they can be salvaged.

Your bathroom might hold a bunch of potential problems. There is a chance that  dangerous chemicals will be absorbed through your skin. Since makeup, skin products and cosmetics are made from chemicals, minerals and formulas that can be altered by the high temperatures and chemicals from fighting the fire. The safest option is to just toss all the bottles, jars, and tubes and buy new ons.

As for your medications,  the potency can be affected by heat, soot, smoke, water and the chemicals left over from the firefighters. Throw them out and refill your prescriptions.

Food and utensils damaged by heat, smoke, chemicals or water may not be safe to use. Food in cans or jars may appear to be okay. But if it has been close to the heat of the fire, it may no longer be edible.

When in doubt, throw it out. Even non-perishable food can be compromised in a fire from water and chemicals used to extinguish the fire can contaminate food. Throw away any raw foods stored outside the refrigerator like potatoes or fruit. Cardboard containers are not secure; undamaged metal cans usually are.

As long as your fridge and freezer stay sealed, the food inside can stay safe for up to four hours. Still, check the items inside and throw out any suspicious items.

Taking care of the rubbish and debris is only one piece of recovering after a house fire. Depending on the severity of the fire and the heat of the blaze, you might even need to  board up your home to prevent additional damage. Fire damage restoration professionals like those at Restoration 1 of East Alabama offers many services to remove the effects of smoke and soot:

We provide 24/7 service for water damage, fire damage, and storm damage for residential and commercial properties.